Run in a Million

As I think I’ve written before, I enjoy running. Most of the time, I enjoy running with my Weimaraner Tobey. I’m not a great runner, but that’s the beauty of running. The runner gets out of it what they put in. I run for a variety of reasons. The first and foremost is probably to wear out Tobey. The thing with a weimaraner is that if they don’t get stimulation, they will make up their own. Usually at the expense of household items being destroyed. Additionally, I’m trying to stay in shape and lose some weight in the process.

So far in 2012, I’ve gone on 56 runs anywhere from less than 2 miles up to slightly over 5. In the past few weeks, I’ve been stuck in a rut and been unable to make it past to the 4 mile barrier. Yesterday, I had one of those amazing memorable runs where everything clicks and I passed the 4 mile mark. The run today was even better. And to cap it off, the run yesterday was a run that won’t soon be forgotten.

The run started at around 8pm on a day when the high temperature was over 90 degrees. Thankfully, the sun was behind the trees and there was plenty of light.  The run started good on a familiar a familiar route along the train tracks towards the local downtown. Lately, the rabbits have been extremely bold along the route. Their routine is to sit along the trail and act like there are no threats in the world, which in turn, drives Tobey and me insane. Tobey because he can’t chase them and me because Tobey keeps pulling me.

Within the first half mile, we came across a rabbit and I instantly let Tobey off leash to try send a stern message to the entire rabbit community. Tobey was off like a flash and had the rabbit running for it’s life. Unfortunately, there is a fence separating the trail from the railroad tracks and the rabbit escaped fairly easily. At this point, I got Tobey on the leash and while he was focused on the scent of the adult rabbit, a baby rabbit was literally within 3 feet of him. We kept running and he never saw it.

While Tobey was still on the scent of the adult rabbit, I looked at the train tracks no more than 15 feet away and in my amazement saw an adult doe. It was awesome to be that close. At this point, Tobey finally looked up and his instinct fully kicked in (Weimaraners were originally bred to take down large animals such as bears). I stopped running and there was an intense stare-down between the doe and Tobey that lasted for at lease 3 minutes before the Doe ran off into the sunset.

At this point, it was exhilarating to have been that close to a wild animal. I know how stupid that must sound, but that was a decent sized deer. Tobey and I continued on to the turnaround point at a 9:45 per mile pace. Not fast, but steady. We stopped for a few minutes for water and started heading home. However, after a quarter of a mile something amazing happened.

As we were running back, I looked across the street and saw an amazing Doe and two baby deer. Tobey was pretty tired, but definitely had the eye of the tiger. We were probably 20-30 feet away from them all at this point and it was so cool to see  the mom giving signals to the children with her tail. We stayed and had a second stare-down for at least 5 minutes before the deer headed back into the forest.

After this, I was rested and energized and to close a long story, completed the run at 4.08 miles.  The splits were:

Today’s goal was to do a short follow-up on the momentum from yesterday. I wanted to do anywhere from 2-3 miles. However, after I got to a mile I thought it best to just keep going. In the end, I made it 4 miles in 35:12, which is under a 9 minute average.

On the cool down, Tobey and I were walking the neighborhood and there as an Indian child playing on a tricycle on the sidewalk unsupervised. When he saw Tobey and I walking up he immediately started crying because a dog was coming and ran out into the middle of the street to get away. I thought that was really funny. In the end, I’m excited about where I’m at and can’t wait to run again soon (taking tomorrow off so Saturday).

The Summer of No Cable – Update

After a month of no cable, I thought I would provide a quick update. I’ve been passing the time watching the mlb.tv package and have had a great opportunity to watch Mad Men. This has worked out better than I could have thought. The only shows that I miss watching are Futurama, Whale Wars and some of the History Channel shows (Big, Bigger, Biggest, Build it Bigger, etc.). I think the hard part will be in the fall with College Football, The League and It’s Always Sunny in Philadelphia.

I signed up for a month trial of Hulu+. I was amazed by the lack of shows that I wanted to watch. Most of the shows either weren’t available or were web only (most Fox shows). The best option was Tosh.0 and it’s certainly not $7.99 a month for one show. I’d be better off buying individual episodes on Amazon. Because of this, I canceled my account and am left with Netflix, HBO Go and MLB.tv.

What I’m Watching & Passing the Time With

Minnesota Twins Baseball – They currently sit with the worst record in the American League, I still can’t get enough. Watching Joe Mauer play on a daily basis is worth the price by itself.

Arrested Development – I just finished watching the entire series. I can’t wait to restart again. The greatest show ever made.

Running – I’ve set a yearly high for miles run in a month and there is still a week left. I’m excited to keep it going. I signed up for the CHA Dog Jog 5k on August 19th and am really looking forward to that.

Reading – I’m through the ‘Hunger Games’ and I recently bought a special edition of ‘A Farewell to Arms’ with all of the alternate endings Hemingway came up with before he got to the one he published with his original notes.

A Farewell to Arms: The Hemingway Library Edition

Since I still don’t know what the purpose of this blog is, I thought I would dedicate a post to some of the various lawn patterns that I have mowed in the back yard.

First off, I really like mowing the lawn. It serves a several purposes for me. First off all, it serves as a source of pride. My grandfather always took a lot of pride in his lawn and that has carried down to me. Given the fact that I have two large dogs, I’ll probably never have the best lawn on the block, but I can always have it mowed and kept up. Secondly, it is strangely cathartic to mow the lawn. I usually put on some music or a podcast and enjoy the hour.

To my friends, it is fairly well known that I have no artistic ability. I can’t draw, can’t sing and I definitely can’t dance. Perhaps mowing patterns in the lawn is as artistic as I can get. With that said, I present various lawn mowing patterns. 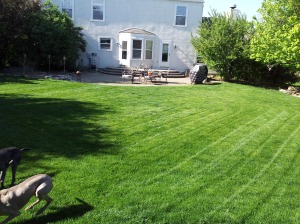 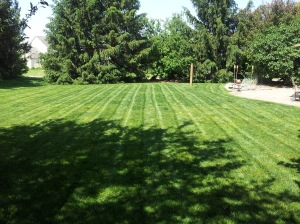 Stripes (if only I could mow in straight lines) 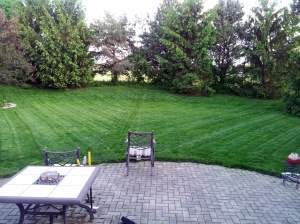 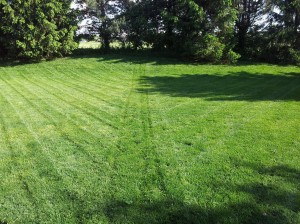 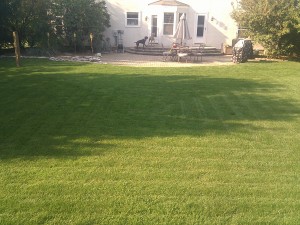