In various past posts, I haven’t been shy in voicing my opinion that Minnesota Twins announcers Burt Blyleven and Dick (Richard) Bremer are unlistenable (they’re so bad that I just invented a word to describe them). Because of this, I find myself listening to the away team broadcasters the vast majority of the time when I watch Twins games.  Occasionally, if I watch on the laptop or listen in the car, I can get the Twins Treasure Island Baseball Network Radio Feed with Dan Gladden and Cory Provus. This is the best case scenario because Dan and Cory do an amazing job and are a delight to listen to. In an ideal world, Cory and Dan would replace the tv announcers full time. 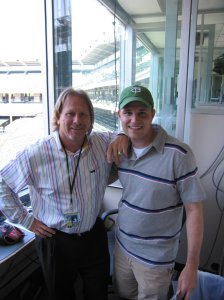 I met Dan Gladden in 2006 at an Indians Game….
really really nice guy

Anyway, since I’ve been watching a lot of different broadcast teams, I started taking some notes on which crews I thought did well. These are ranked in no apparent order (although it’s probably the order in which the Twins played the opposing teams).

1. Orioles – The Orioles were one of the first games when I started listening to the non-Twins feed. Let me say, what an amazing crew to start with. I couldn’t have been more impressed with Gary Thorne and the other person in the booth (I didn’t get the name but I think it was Mike Bordick). They were incredibly insightful and entertaining and really kept the game moving along at a good pace. After a month of road feeds… the Orioles have been the the best of the bunch (Vin Scully excluded). – Grade – A+

2. Brewers – First impression – Average announcers. When they played the Twins, the Brewers were not a good team but the announcers still had optimism. I thought there was a little too much banter with the Brewers Live crew (the studio portion of the crew) that seemed forced. I could see where this would get annoying because I was slightly bored with it after two games. In the end, I thought the two play-by-play announcers did a good job and kept the game moving along. – Grade – B-

3. Seattle – Nothing flashy. They had nothing but nice things to say about the Twins and Minnesota but became boring as the game went on. I’d like to see more personality. – Grade – C+

4. Kansas City – Nothing special and it seems they didn’t do their homework on the Twins saying ‘Parmalee has always been a great hitter’….. Very very bland. They brought in Jeff Montgomery and offered really good analysis. I’d like to see more of that. However, the main play-by-play guys are not good. I think it’s Rex Hudler who is especially bad. Grade – C

5. Philadelphia – By far the worst broadcast I’ve heard. They made a complaint that Joe Mauer only had 18 RBI’s, which is horrible logic because the hitters in front of him have the lowest batting  average and OBP of any team in the league so there are literally no runners on base for Mauer to drive in. They also said that an error by the SS Escobar would have been a sure double play despite the fact there were two outs…. then said he makes that play 10 out 10 times… despite the fact that he just booted it. Sarge is brutal. They were so bad I actually turned back to Fox Sports North. Grade – F

6. Chicago White Sox – Hawk Harrelson can be a lot to handle, but really I like that he’s all in for his team and has an actual personality. When I watch, it feels like I’m watching the game with another fan or a friend. After watching a bunch of different announcers, it’s amazing how many are completely boring so it’s nice to have personality. Grade – A

7. Los Angeles Dodgers – I still have trouble believing how awesome Vin Scully is. LA had a day game today and I was able to listen to the first 3 innings (Vin does both TV and Radio for the first 3 innings, then switches to TV only). Grade – A+

If you want to weigh in on your favorite team’s announcer or want to tell me how stupid I am for my opinion, please feel free to drop a note in the comments