Try to take that attitude toward life, that you’re going to pay forward.  So seldom can we pay back because those who helped most–your parents and other people–will be gone, but you’ll find that you do want to pay.  Emerson had something to say about that: “You can pay back only seldom.”  But he said, “You can always pay forward, and you must pay line for line, deed for deed, and cent for cent.”  He said, “Beware of too much good accumulating in your palm or it will fast corrupt.”  That was Emerson’s attitude, and no one put it better than he did. – Woody Hayes

I have absolutely wonderful friends. Each year, I participate in the Citizens for Humane Action (CHA) Dog Jog 5k race. As part of this, I conduct fundraising for the local 501C(3)non-profit animal shelter. The support was been overwhelming. In the four years I’ve been doing fundraising, we’ve raised over $3000 for the animals of Columbus and the surrounding area.

CHA, for their part, has been equally great. They put on a fun event and they are overly gracious with their recognition. They have great vendors and in some years they’ll have side competitions for the pups. One year Tobey finished second in the trick competition by teaching children fire safety (stop, drop and roll). In the 2012 event, as a thank you for finishing as the second place fundraiser, I was presented with a gift basket. Included were dog treats and toys for the pups and a certificate for a Picnic Pack that feeds 10 from the famous Schmidt’s Haus restaurant in Columbus. It was a very nice gesture by CHA as a token of their appreciation.

The original plan was to have a night of Schmidt’s and Wine at a friends house (his place is amazing for gatherings and he is a skilled vintner). Unfortunately, as it tends to, life started getting in the way of our plans. School started for his girls and I found myself traveling to see my fiance’ nearly every weekend. Weeks and months started to pass and the certificate had a firm February 28th, 2013 expiration date. I thought the next best thing to the wine event would be a lunch as a thank you to the great friends of my life and an easy way to ‘pay it forward’ to all those who have been so generous and supportive.

I scheduled lunch for a Thursday several weeks in advance so people could clear their schedules and reserved a conference room in the building where the majority worked. The week of the lunch, I called Schmidt’s and ordered the ‘Picnic Pack’ to be picked up Thursday at 11:15am. When I arrived, they were still in the back working on everything. The pack included 4 pounds of brats, sides, buns, sauerkraut, etc. Everything I would need to host a great ‘thank you’ lunch. After waiting a few minutes, the host summoned me with four bags full of Schmidt’s. He even mentioned the meat was in a separate bag and included a ton of silverware and napkins. I was set.

You can imagine my horror when I got to the conference room and started setting everything up to find that the brats and bahama mama’s were still raw.  I’m still confused how could the restaurant would think I’m going to grill the meat in 25 degree temperatures in the dead of winter…. Before panic could set in, my friends started arriving en mass. In my mind, my lunch had gone from a nice gesture to an epic fail. 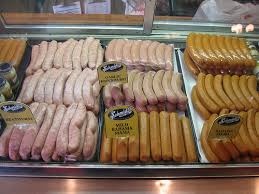 As I mentioned previously, I have some of the most amazing friends. Everyone seemed more excited that the meat wasn’t cooked because this would give them a great ‘Mark Story’ for future use. In the end, we went to the cafeteria and grabbed sandwiches or salads and came back to the conference room and shared a nice lunch with friends, which was the plan all along. What I learned is to always double check the order… and next time…. I’m going with the six foot party sub from Subway :).

If you have any Epic Fails or any stories of my Epic Fails… feel free to leave a note in the comments.